Eight months after its launch, Bay Mills Investment Group is facing a “restructuring in management” due to alleged health issues and the departure of key executives. Yet to raise any capital, the firm’s lawyer says the fund is “on pause,” its website’s content has been removed, and a key partner has gone months without hearing from Bay Mills executives.

Alfred Apps, a partner with Miller Thomson Lawyers in Toronto who provides pro bono work to the venture firm, confirmed the pause of the BIPOC-focused fund with BetaKit. Apps told BetaKit that Bay Mills had suspended operations approximately 21 days ago “while they’re working through restructuring in management.”

Apps attributed the pause to a “serious health issue” at the management level, but would not confirm the specific manager to BetaKit. BetaKit has been unable to independently confirm any health issues amongst Bay Mills leadership.

Apps did confirm the departure of Melissa Allen, Bay Mill COO and stated partner in public coverage of the firm. BetaKit has learned that, coinciding with her departure, Allen will launch her own firm, Capital M Ventures.

When contacted by BetaKit, Allen asked how we knew that she was behind Capital M Ventures, then offered to send photos and a press release in the first half of October. “Until then I’m not able to speak on anything yet,” she said. 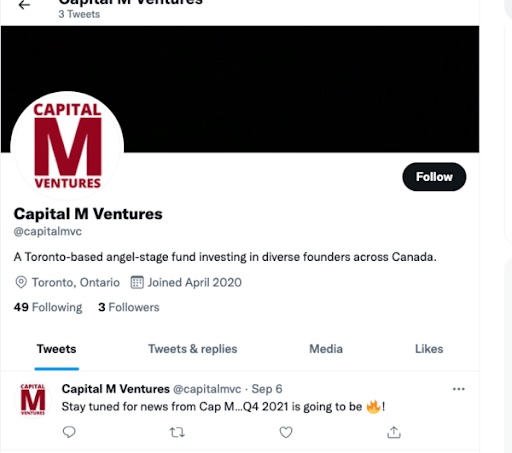 On Twitter, Capital M Ventures described itself as a “Toronto-based angel-stage fund investing in diverse founders across Canada.” A Tweet from the account noted to stay tuned for news from “Cap M,” adding that “Q4 2021 is going to be hot.”

As of September 23, following outreach from BetaKit to Allen and Bay Mills, Capital M’s Twitter account was no longer active.

Sheldon James – Bay Mills managing partner, president, and CEO – did not respond to several interview requests from BetaKit, nor did Allen respond directly to questions on the status of Bay Mills. An email reply sent from Bay Mills’ general email account, said: “We are currently not doing any press/interviews at this time.”

The radio silence extends to a key Bay Mills partner. In July, Bay Mills and the National Angel Capital Organization (NACO) announced a partnership to create the Black Presidents Club, a new investment group focused on Black entrepreneurs. But it seems not much has happened since.

That more BIPOC-focused funds have announced launches than closes underscores the “very high frictions of raising capital” in Canadian tech.

Claudio Rojas, CEO of NACO, told BetaKit in September that it has been “a couple of months” since he talked to James or Allen. Despite that, he said NACO is in the early stages of planning what the club looks like.

Rojas added that NACO is still committed to the Black community regardless of what is happening to the Bay MIlls Investment Group.

While Rojas declined to comment on Bay Mills specifically, he did state that raising capital in Canada is tremendously difficult, and that any new fund is likely to experience “those very high frictions of raising capital.”

Bay Mills’ fund launched in February, with the stated goal of raising $100 million to invest in BIPOC entrepreneurs. At the time, Forbes reported that Bay Mills had already raised $15 million CAD, while Bay Street Bull quoted James as saying, “we’re very happy to just about be ready to close the first $25 million.”

Apps emphasized to BetaKit that Bay Mills hasn’t actually closed any funding to date. “They haven’t closed the fund or made any investments,” Apps said.

“This is just a temporary pause. There’s been no negative fall-out for anybody because they actually held off closing the round to make sure they had all their ducks in a row,” Apps added.

An Internet Archive snapshot of Bay Mills’ website dated in late July noted the firm had $15 million in commitments rather than closed capital. The site also noted an intention to invest up to $5 million in seed and Series A rounds for BIPOC founders operating in “high-growth markets.”

It’s not been easy for Black entrepreneurs to access capital. According to a report from ProjectDiane,11 African American women raised $1 million in venture capital funding in 2018, comprising approximately 0.2 percent of all venture funding in the United States for that year.

“Of those few that have raised money, the average amount of funding is $36,000,” Amoye Henry wrote in response to that report for an essay published on BetaKit in 2020. “That’s compared to the average startup, usually founded by a white male, that typically fails, which raises millions on average in venture funding.”

According to a 2019 Canadian Venture Capital & Private Equity Association study, only 18 percent of partners at venture capital firms were “visible minorities,” and that number dropped to six percent for private equity investors. The problem also extends to enterprise: one study from February found 89 percent of Canada’s largest organizations have zero Black women in the pipeline to the leadership level.

There are also a small number of BIPOC-focused funds in Canada, and with its $100 million target, Bay Mill is looking to be the largest. One example is the Black Innovation Fund, which launched earlier this year with $6.4 million from BDC Capital, RBC, Globalive Capital, and TELUS Ventures. 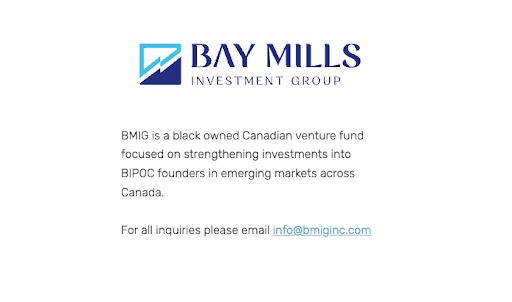 The entirety of Bay Mills’ website as it appears today.

Other funds, such as Marigold Capital and Dream Maker Ventures announced the launch of BIPOC-focused funds but have yet to announce the closing of any capital. Dream Maker has since seen members of its team depart to other funds, with founder Isaac Olowolafe Jr. shifting his focus to different Black-focused initiatives, including the Black Innovation Fund, led by Black Innovation Capital.

One of the most prominent investors in the space right now may actually not be a fund, but an angel group. Backbone Angels is a collection of past and current women leaders at Shopify, focused on investing in women and non-binary founders with a specific focus on BIPOC-led companies.

The emergence of BIPOC-focused funds in Canada speaks to their need, but the fact that more funds have announced launches than closes underscores the “very high frictions of raising capital” identified by Rojas.

On the company’s Instagram page, promotional copy notes that the Bay Mills Diversity Fund “will help bridge the gap between underrepresented founders and enduring business opportunities – because diverse leaders matter.”

An Internet Archive snapshot shows a detailed version of Bay Mills’ website was live as late as July before being supplanted by a placeholder page. Following requests for comment from BetaKit in September, the placeholder was replaced with a mostly vacant landing page describing Bay Mills as “a black owned Canadian venture fund focused on strengthening investments into BIPOC founders in emerging markets across Canada.”

The prior placeholder stated: “We’ll be right back. Site will be available soon. Thank you for your patience!”

With files from Douglas Soltys and Meagan Simpson.

GetCovered.io Raises $7 Million in Series A Funding Led by RET Ventures to Simplify…

COP26 and the Climate Finance Bubble